So for today’s article, we will be going over our ultimate Yongnuo YN300 Air review that we have finally managed to find the time to sit down, type up, and publish. We have noticed more and more videographers and Youtubers reaching out for advice on what video lights are actually worth their money and we feel that the YN300 Air is the way to go.

As you may know, since its release onto the market a few years back, the YN300 Air has gone from strength to strength growing its user base consistently each month with its great reputation within the community growing at a similar pace. Due to the fair price, solid performance, and decent build quality of the YN300 we don’t see this changing anytime soon and fully expect its reputation to continue to increase over the coming months and years. Being a simple LED light system, the user interface, and the control system is very basic and easy to use as shown in the image above. It consists of a handful of buttons and an LED screen to show the various settings and levels that have been set up for the light prior to use. The simplicity of the control system on the YN300 also allows yo quickly and easily tweak its settings mid-session to get exactly what you need out of the light too.

In addition to this, the smartphone app for the YN300 Air is very simple to use and is desigined to allow you to easily tweak the settings on the YN300 Air with ease. That said, early versions of the app had a ton of bugs making it a nightmare to use so if you have the older versions of the Yongnuo app on your phone, make sure that it is up to date to get the best possible performance.

Once the app is installed you connect to the light via either bluetooth or wifi and can change its brightness as well as a few of other settings via your smartphone as shown in the image below. Both the app and the light do seem to perform better when using a Bluetooth connection rather than a wifi connection so keep that in mind when setting your rig up. 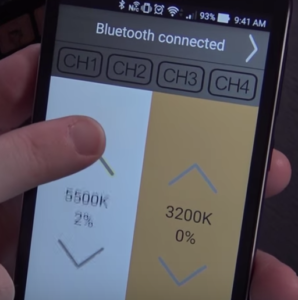 So, now that we have covered the control system for the Yongnuo YN300 Air we would like to move on to the mounting system. Unlike some other entry-level, budget-friendly lighting solutions on the market right now, the mounting clip that is included with your Yongnuo YN300 Air is pretty decent and definatley gets the job done. On top of this, the slip allows you to mount the light to the hot shoe mount on your camera body or on a tripod or other stand to use it exactly as required. 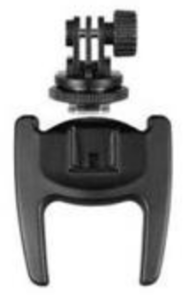 The default mount included with your purchase is shown in the image above, although it is pretty basic and has a cheap feel to it, we would imagine that it should be able to meet your needs when using the light. That said, there are a number of both third-party and official Yongnuo mounts and clips available that allow you to clip the light onto pretty much anything that you can imagine if needed. 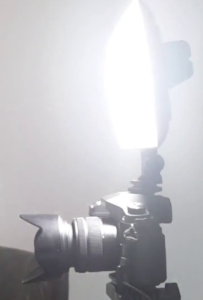 Moving on to the performance offered by this great little LED video light we would just like to say, that in our opinion at least, when it comes to its performance, it really does stand head and shoulders above the competing video lighting solutions at this price point in the market. It is an excellent soft light solution that provides you with a wide illuminating angle perfect for any type of vlogging or videography.

The soft light feature helps to soften any shadows that your subject may have on them from other lighting sources and help improve the overall image quality of your footage even when not used in low light situations. The LEDs in the Yongnuo YN300 Air are also as close to natural light that we have seen at this price point in the market too helping you keep that natural feel during use.

As Yongnuo has built the YN300 Air with some great built-in tech to manage the light it minimized the chance of any ripple, strobing or jitter during use. Although features like these are pretty common on the market at this price point these days, we feel that the tech in the YN300 Air is at the higher end of the table and helps it compete with some higher price point lighting solutions too.

The digital encoder on the YN300 Air allows you to quickly and easily digitally dim the light to suit your needs for your specific situation at any time. You are able to further customize this into either coarse tuning mode or fine tuning mode to perfect the light to get the best video image quality possible when using the light.

The battery life on the YN300 Air is also solid considering the power of the light and its price point in the market. Simply insert its NP-F lithium battery and you are good to go. Due to the NP-F lithium battery being used in a number of popular photography and videography accessories, spares (Click here to check for product prices and availability) are also readily available if needed.

On the flipside of this though, we know some people prefer to just pick up a decent external power supply (Click here to check for product prices and availability) for their kit and get on with their gig without having to worry about battery life. Just be aware that the Yongnuo YN300 Air does not have the technology to charge the battery inside of it via an external power supply like some of the premium price point lights do so you will have to manually recharge your batteries if you choose to use them as your power solution for the light. Now, let us start the build quality section of our article by reminding you that the Yongnuo YN300 Air is a cheaper video light and its performance and build quality are actually great for its price tag. That said, its although the build quality of the YN300 Air gets the job done, it does have a kind of cheap feel to it. Now we know that the majority of our readers won’t be bothered about this in the slightest but we just wanted to point it out.

Anyway, as far as LED lights go, the YN300 Air is solid. It is mostly made from plastics but they are decent quality and pretty robust ensuring that the light can take plenty of knocks and bumps during use without breaking. In addition to this, the built in overheating technology does a great job of helping to dissipate heat to keep the light as cool as possible during use.

The hot shoe mount on the Yongnuo YN300 Air is also pretty decent quality too and we doubt that it will warp in shape any time soon like some other entry level products can. This ensures that you can quickly and easily mount or unmount the light from your camera, tripod, or stand of choice without is getting stuck or potentially damaging your kit.

Although the light dissipation filters that are included are of a pretty basic design, they definatley get the job done well while also keeping the price tag of the light down. On top of this, if you are planning to use a bunch of filters with the light to change the effect if provides, we would always recommend that you pick up a decent pack of light filters (Click here to check for product prices and availability) to ensure that you have the colors that you plan to use.

The lighting system contains Three Hundred individual LED bulbs and we were unable to find a single report from people who own the Yongnuo YN300 Air saying that the LEDs were failing in their lights. This helps push the YN300 Air out even further ahead of the competition as failing LEDs on the entry-level lighting units can be common and be a real pain to deal with but thankfully, this is a none issue with this unit.

The included tilt adjuster to allow you to tilt the light up and down is put together well and smooth to operate while also having a decent level of resistance to help prevent you from over tilting when adjusting the position of the light. The actual battery housing is solid too and the holders should keep your battery in place during use without it accidentally falling out resulting in the light turning off.

All in all, the build quality gets the job done of providing you a solid and robust light while keeping the price tag as low as possible. It neither stands out from or falls behind the competing lights at this price point in the market when it comes to build quality but the other features explained above as well as its excellent performance help to push it ahead of the pack in our opinion.

Question – What are the dimensions of the Yongnuo YN300 Air?

Question – Does the Yongnuo YN300 Air keep the same color temperature and dimming settings when you power cycle it?

Answer – Yes, the YN300 Air will hold the settings selected when power cycling.

Question – How many individual LEDs does the YN300 Air have?

The video above offers one of the best third-party reviews of the Yongnuo YN300 Air available at the time of writing that has been produced by an external user of the YN300 Air. It is a pretty short video but covers some excellent points and if you have the time available it is worth watching. That said though, we have covered most of the points they are trying to make in our article but just wanted to share the video to offer an independent opinion of the light.

This review of the Yongnuo YN300 Air by an independent videographer comments on how they feel that the YN300 Air is a great light that is definatley worth its price tag and that they are surprised that it is available for under $50. They also comment on how they feel that the YN300 Air was a game changer for them and that the battery life on the light is great. They comment on how they have worked events that have lasted for Three hours and the battery has lasted without issue.

As you can probably guess, that brings us to the end of our Yongnuo YN300 Air review as far as an entry level light panel goes, it is pretty solid in all aspects. It is cheap, has a solid build quality, and offers some excellent performance too while also having rightfully earned itself an excellent reputation within the community.

If you are looking for a soft light for Vlogging or for your videography footage that won’t break the bank while also performing well, we would highly recommend that you seriously consider picking up the Yongnuo YN300 Air. We feel it will be able to meet most, if not all of your needs while also allowing you to quickly and easily tweak the performance of the light to meet your needs.

We know that many people instantly gravitate to the Neewer CN-160 (Click here to check for product prices and availability) when looking to pick up a cheap, entry-level lighting solution for their videography but the Yongnuo YN300 Air is quickly establishing itself as its lead rival while also beating it in some areas.