So we have noticed that we have been slacking when it comes to featuring microphones on our blog and we have sen a few people reach out requesting reviews of specific microphones. As we have a fair bit of free time right now, we have decided to use this to our advantage and knock out as many reviews of microphones as possible kicking off with our Takstar SGC-698 review.

Now, chances are, if you are reading this, you may know that the Takstar SGC-698 has pretty much split the community in two. Around half love and around half hate it due to a few reasons that we will be covering in the article. That said, although the SGC-698 is a pretty solid entry-level hot-shoe based microphone, we feel that its little brother the Takstar SGC-598  (Click here to check for product prices and availability) is better overall.

Not only does the SGC-598 offer a very similar level of performance to the SGC-698 but it is also cheaper allowing you to save a little cash while also having earned a better reputation within the community. Anyway, as we said, the Takstar SGC-698 does have a large number of fans who love the microphone so we will still be reviewing it in full for any of our readers who are looking to add the microphone to their camera accessories. 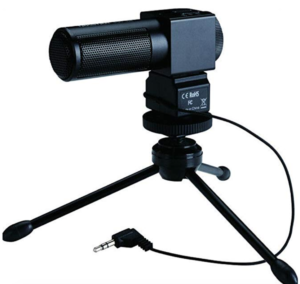 As you would expect from a simple, entry-level hot-shoe microphone, the Takstar SGC-698 is extremely easy to use. We would imagine that all of our readers would be able to take it out of the box after ordering it, mount it to their camera body, jack it into their camera and use it without issue.

As you would expect from an entry-level microphone though, there is not much customization to be had and other than the +20Db or -10Db options there really is very little to tweak. That said, lack of customization of the audio the microphone picks up is very common with the entry-level mic range and is to be expected in all fairness.

The SGC-698 uses a standard hot shoe mount too so it will mount directly to any camera body that has a standard hot shoe mount on it. One of the main issues that we do see with entry-level photographers is that they will order an external microphone for their camera only to later find out that their camera body of choice does not actually have an external microphone input.

We know that the Takstar SGC-698 is cheap but always check that your camera body has a microphone input jack before ordering to help save you the hassle of returning the mic. The SGC-698 uses a standard 3.5mm jack so it will plug directly into any camera body with a microphone input without having to pick up an adaptor.

All in all, Takstar have done a decent job of ensuring that the interface for the SGC-698 is as simple and easy as possible and that anyone looking to purchase the SGC-698 as their very first microphone will be able to use it with ease. 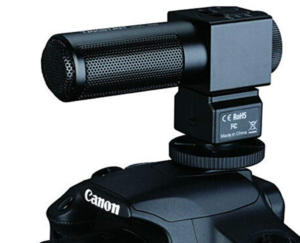 When it comes to performance, the Takstar SGC-698 does have some advantages over other entry-level microphones from more established brands such as Rode. Rather than having to rely on an external power source and potentially draining your cameras battery life, the SGC-698 can be powered by batteries if required unlike most competing microphones in this price point.

As we touched on earlier, the Takstar SGC-698 also has a +20db and -10Db setting that is also rare at this price point helping to set the microphone apart from the competition. The low cut filter on the microphone performs well and helps to improve the audio quality of the audio track you record using the SGC-698 too by reducing noise.

Now, without a doubt one of the main problems of the entry-level microphones is that many of them pick up interference from modern cell phones when used near your phone. This can end up being anything from a little bit of noise to some full-blown interference that totally ruins your audio track. Takstar has added their anti-radio frequency interference shield to the SGC-698 and although it is not perfect, it definatley does help and is a nice addition for a microphone with a price tag as low as this. 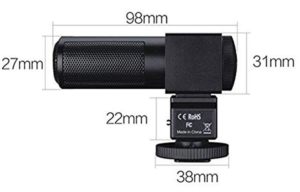 The image above shows the dimensions for the Takstar SGC-698 and with it also coming in at only 1.15 pounds it is also pretty light too. This allows you to mount the mic to your camera body and hold it up during use for extended periods of time without you feeling any aches or pains in your arms. Some of the popular entry-level microphones are surprisingly heavy for some reason and offer no real trade-off for being so heavy either helping to give the SGC-598 an advantage.

As the build quality of an entry-level product is usually where the manufacturer will try to reduce their costs to keep the price tag low and help their profits, we feel that a middle of the road build quality is fine. As we mentioned, the SGC-598 is pretty lightweight while also being pretty robust for its price too.

Question – Will the Takstar SGC-698 work with my camera?

Question – What battery does the Takstar SGC-698 require?

It offers an external opinion on the microphone as well as shares some examples of the audio track that you are able to record using it too. Additionally, you can also read a number of independent reviews that have been left by third-party videographers who have picked the SGC-698 up.

That brings our Takstar SGC-698 review to an end and although the microphone can record a decent sound quality helping to improve the quality of your audio track over most onboard microphones, we still feel the Takstar SGC-598  (Click here to check for product prices and availability) would be a better addition to your camera accessories.