Over the last few months, we have seen a consistent number of people reaching out to use for advice on what the Canon equivalent to the Nikon d750 is. Although there is a small amount of debate on the subject, the vast majority of the community, including ourselves feel that it is the Canon EOS 6D Mark II (Click here to check for product prices and availability).

The Canon EOS 6D Mark II really is an excellent camera that will make a great investment for anyone who for whatever reason chooses not to go with the Nikon D750. As we have some spare time we have decided to publish this article to go over the comparison between the two cameras in an attempt to help as many of our readers as possible who may find themselves asking this same question. Finally being able to get around to publishing an article on the subject will also give us something to link people to in the future who may ask use the same question and save us having to keep typing the same thing out over and over.

Comparing The Canon And Nikon Offerings

Our table below gives a quick and easy comparison between both the Canon EOS 6D Mark II and the Nikon d750 across some of the key specifications that we feel most people will be interested in. Due to the prices of both cameras changing regularly we have used dollar signs rather than a solid price but currently, the Nikon d750 is more expensive than the Canon. You can click here to check the latest price on the Canon or click here to check the current price for the Nikon. 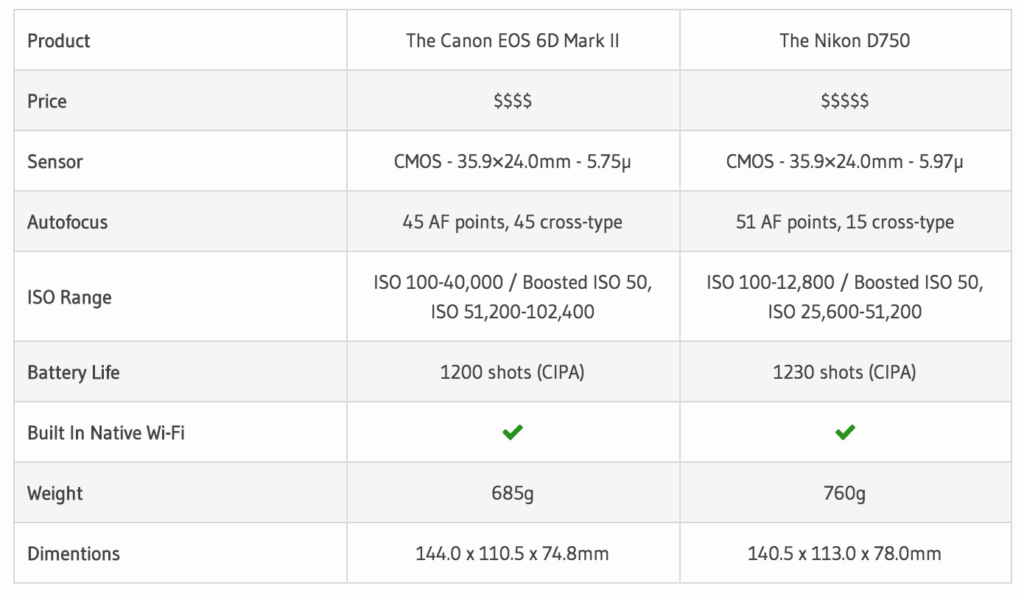 The video below also offers a much more in-depth comparison of the Canon equivalent to Nikon d750 by pitting the two cameras against each. The video puts them both through a number of different tests to show the strengths and weaknesses of each camera.

Click Here To Check For Prices On The Canon EOS 6D Mark II!

Click Here To Check For Prices On The Nikon d750!

When put through a standard low light performance test where the focus assist lamp on the d750 camera is disabled and two high contrast subjects are lined up at different distances from the camera and different brightnesses both of the cameras have a very similar performance. With a test of switching between each of the two subjects against a timer to see how long it takes them to get thirty focus locks, the 6D comes in at 71.3 seconds and the d750 comes in at 71.6 seconds so its only 0.3 of a second between them.

That said, if you do enable the focus assist lamp on the d750 then its time drops drastically down to only 42 seconds giving it a massive time advantage over the 6D but keep in mind that this will have a direct effect on the battery life of the d750 and reduce the number of photographs you are able to capture with it before running out of juice.

Both of the cameras are also rated down to -3EV for their low light threshold too keeping things relatively even overall unless you do choose to use the focus assist lamp on the d750 then it does come out ahead of the 6D.

Both the Canon EOS 6D Mark II and the Nikon d750 offer some great portrait photography potential with the results between captured portraits coming down to personal preference of the image rather than the specs of the camera. That said the d750 tends to give a warmer portrait whereas the 6D tends to do a better job of capturing a range of brightness levels in the image.

One thing that we would say is if you are looking to spend this much on a camera then you probably know what portrait photography style you personally prefer and can use that to help you may your decision.

Both the Nikon d750 and the Canon EOS 6D Mark II come with build in HDR technology as standard to help assist you quickly and easily capture some landscape photographs on the fly with minimal effort. It has to be said that the d750 is quicker than the 6D but on the flip side the 6D does a much better job of capturing colors and helping to reduce any post-production work on the image.

Again, when it comes to the various types of landscape photography then your landscape lens of choice will come into play. Again, just like with the portrait photography, different photographers prefer different lens for their landscapes with some preferring the Nikon range while some prefer the Canon range.

Although the Nikon camera has a speed advantage, the Canon has a color advantage when it comes to capturing epic landscape vistas. Personally, we almost always have a few extra seconds to spare to capture the initial photograph so would choose the Canon over the Nikon but again, this will come down to your own personal preference.

Coming from Nikon and Canon respectively, it should be no surprise that both cameras have an excellent build quality. In addition to this, the high price tag of the cameras also reflect the additional steps each of the manufacturers have taken to help increase the build quality of their product.

There’s no way to choose a winner in this category as no matter what product you choose, you will be getting a great camera with a very high standard of quality and usability when it comes to its build.

Both of the cameras have an app available from the Apple and Google app stores to allow you to tweak various settings on your camera via your phone. Although we expect the Nikon app to catch up in the future, at the time of writing, the Canon app is much better and blows the Nikon app out the water.

It offers much more functionality, is slightly easier to use, and allows you to tweak various settings easier with less time wasted on navigating through the app. That said, the Nikon app does its job and we fully expect it to be overhauled with a better version being released in the coming months to put it on a more level playing field with the Canon app.

Click Here To Check For Prices On The The Canon EOS 6D Mark II!

The video below offers an additional third-party, independent review for the Canon EOS 6D Mark II to offer our readers an independent opinion of the product.

3 Of The Best Tripods For Nikon D750 Cameras!

4 Of The Best Flashguns For Nikon D750 Cameras!

3 Of The Best Memory Cards For Nikon D750 Cameras!

2 Of The Best Flash Triggers For Canon 6D Cameras!